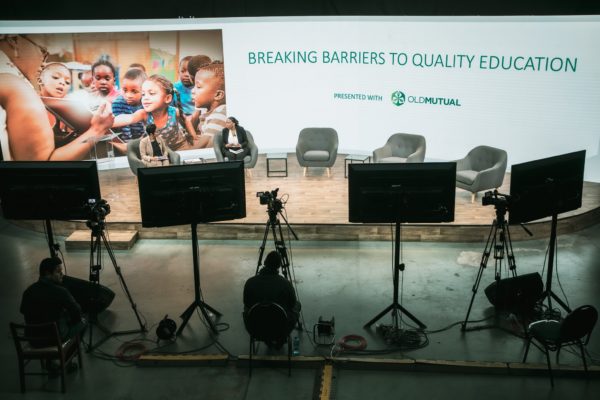 Kulula Manona from the Department of Basic Education was positive about the state of education prior to the pandemic and spoke about gains made through collaborative efforts, in particular around the testing of initiatives to strengthen early–grade reading and writing. Manona also said that government had made progress in growing the competencies of teachers and that this had been disrupted by the lockdown.

Following the PIRLS study that showed the poor levels of reading for meaning among grade 4s, the DBE had implemented several programmes, one of which was to bring in coaches to support teachers. DBE had asked business and society to walk the journey with them and established the National Reading Coalition.

Ncontsa, the CEO of BRIDGE, countered that Covid-19 had only exacerbated pre-existing problems in the education system. She highlighted a lack of accountability and lack of capacity as key barriers to quality education. Ncontsa referred to a Stellenbosch University report that highlighted four binding constraints to quality education in South Africa, namely: 1) weak institutional functionality, 2) undue union influence that was not in the best interests of the children, 3) the fact that many teachers did not have strong content knowledge or pedagogical skills and 4) the quality of teaching at school was not guaranteed.

Ncontsa said that children from poor communities had lost out on at least six months of school so far in 2020 and that the results of a survey by one of the teacher unions showed that at least half of teachers were not able to communicate with their students during lockdown. Manona echoed this, saying that teachers had struggled to continue teaching because of a lack of access to children during lockdown. However, as announced in the most recent State of the National Address, the provision of digital tools and resources for children was now a priority for government.

Through their communities of practice, BRIDGE had learned that although teachers generally did want to embrace technology there was a lot of fear around it. This highlights a huge gap and possibility for the private sector to partner with government to fast-track how teachers use technology to teach. There was a need to look at what the private sector could provide as well as a need for honesty from the department and teachers about what they know and don’t know as there is often reluctance for fear of being exposed. Ncontsa also emphasised the importance of strategies to encourage self-directed learning by children through technology.

Ncontsa said that as a result of Covid-19, civil society, funders and government had come together in more meaningful ways. To date, there have been seven meetings among these stakeholders, in which the DBE has shared its plans and been transparent about its shortcomings, enabling NPOs and the private sector to see where they can get involved to support the system. Although Covid-19 has been devastating in many ways, it has opened avenues for catalysing private-sector funding and support for schools. Ncontsa urged that more of this was needed, while also being clear on roles and responsibilities.

Manona echoed the importance of collaboration, saying that the DBE had discovered that partners were operating in silos, with small pockets of excellence, and lessons were not being shared. There were also many people who had previously wanted to contribute but did not know how – now, there is a platform through which they can do this.

Diamond said that Old Mutual is focusing on partnerships – firstly with government, as it was important to understand government’s strategy so that they could see how and where to provide support. Diamond emphasised that companies in the private sector needed to galvanise each other and collaborate more to avoid duplicating resources. In pursuing their individual strategies, there was a risk that certain areas might be neglected by corporates. For these reasons, Diamond argued that corporates needed to drive education change as a collective and not as individuals.

Diamond spoke about ECD being a key lever for later success at school. Children from affluent communities have had at least two years of learning before starting grade 1, whereas children from poorer communities have not had this. In response, Old Mutual would be supporting ECD in its next strategic cycle, focusing on numeracy and literacy for children aged 5-6 years.

Manona highlighted that with government’s decision to shift the ECD function from the Department of Social Development to DBE there would be further opportunities for collaboration. She urged corporates and NPOs to consider how they could collaborate to support the DBE with its new function.

Article was written by Rebecca Mhere