Reconnecting with our natural environment 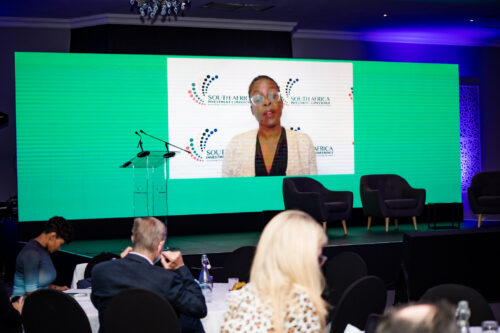 “Preserving our planet is a universal aspiration that touches every life. The existential challenges that we face in the form of climate change, the loss of biodiversity, and pollution call for a collective solution,” keynote speaker Trudi Makhaya urged delegates in her keynote address at the 2022 Trialogue Business in Society Conference.

“All segments of society and all segments of the economy have a role to play,” urged Makhaya, the special economic advisor to President Cyril Ramaphosa. During her talk, she shared valuable insights into how South Africa is working for positive environmental impact and economic growth.

South Africa is an outlier

“The South African economy presents a challenging contradiction. It is a developing middle-income economy with relatively high levels of poverty….Yet alongside these socioeconomic deficits, the South African economy is in the top 20 in the world when it comes to carbon emissions on a per capita basis. This makes the country an outlier. Countries tend to have high rates of poverty and low levels of carbon emissions, or they are prosperous, with high levels of emissions,” said Makhaya.

Most of South Africa’s carbon emissions come from coal-based energy generation. However, our coal mining industry makes an important economic contribution. Makhaya stated that we must recognise the opportunities for transitioning to a low-carbon economy.

How South Africa is moving towards a green economy

According to Makhaya, the green economy refers to all activities required to help the country adapt to and mitigate climate change through lowering emissions. It also refers to economic activities that reduce the intensity of resource usage in the economy, moving towards using sustainable materials, eliminating waste, and supporting biodiversity.

South Africa has been moving towards a green economy for some time. Makhaya shared examples, including:

An important outcome at COP26 in 2021 was the partnership crafted by South Africa and the United Kingdom, European Union, France, Germany, and the USA. The resources mobilised could accelerate South Africa’s transition to a low-emissions economy and out of the reliance on coal. This includes an $8.5 billion package of grants and concessional finance, which is under negotiation. Makhaya highlighted three focal areas for the package:

Electricity generation contributes 41% of South Africa’s greenhouse gas emissions. Financing could support Eskom’s efforts. Eskom has started the unbundling processes towards a transparent electricity supply industry with fair opportunities for all sources of generation. It is also scheduled to reduce its coal-fired power capacity by 8 000MW to 12 000MW by closing coal-fired power plants over the next ten years. This will lead to reduced emissions and is happening alongside work to repurpose and repower assets for sustainable technologies. “A whole reset of economic activities can emerge from the decarbonisation of our energy system,” says Makhaya.

The partnership aims to ensure we manufacture hybrid and electric vehicles. South Africa could lose its most important export markets, including the European Union, if this transition doesn’t happen. “Much of this will depend on investment by the automotive sector itself, but there is catalytic work that needs concessional finance. This includes support for the transition period, to build domestic demand for electric and hybrid vehicles, the development of supportive infrastructure for the usage of electric vehicles, and the development of a battery manufacturing industry,” Makhaya explained.

Transitioning the energy sector could result in significant job creation. Globally, the financial sector has been under pressure to move away from financing activities that are harmful to the planet. This should all happen in the spirit of a phased and just transition.