Insights from The Trialogue Business in Society Handbook 2018

Companies spent an estimated R9.7 billion on corporate social investment (CSI) in South Africa in 2018 – a 7% year-on-year increase in rand terms (2017: R9.1 billion) and, taking inflation into account, the first real increase in five years, according to Trialogue’s 2018 research into the state of CSI in South Africa, featured in the 21st edition of The Trialogue Business in Society Handbook, which was launched in November.

The mining, financial and retail sectors together accounted for just under two-thirds (60%) of total CSI expenditure, with mining and quarrying alone contributing a quarter of total CSI spend. CSI spend remains concentrated among larger companies, says Trialogue MD Nick Rockey. “The top 100 companies (by CSI spend) invested R6.9 billion, or nearly three-quarters of the total CSI spend. Just 17 companies accounted for well over half of the total amount spent by the top 100 companies.” Nearly two-thirds of companies surveyed by Trialogue reported an increase in their CSI spend in the 2018 financial year.

Projects in urban and peri-urban areas received more support (57%) than those in rural areas (39%). Only 7% of the companies surveyed supported projects beyond South Africa, and these received less than 1% of total CSI spend. Developmental projects that operated in two or more provinces received the largest portion of CSI expenditure, followed by projects in Gauteng and the Western Cape.

Non-profit organisations (NPOs) remained the most popular channel through which companies directed their CSI, with 90% of corporates giving to NPOs in 2018. Half of total CSI spend was directed to NPOs. Corporate spend on government institutions such as schools, universities, hospitals and clinics increased to 27%.

The majority of companies (80%) had formal employee volunteer programmes. NPOs most liked fundraising and collection drives, which were offered by 81% of companies. Companies most commonly held four or more company-organised volunteering initiatives per year, while a fifth limited these initiatives to Mandela Day.

“After two decades of tracking CSI, the Handbook continues to underscore – with greater emphasis each year – the crucial need to work together, across sectors, to enhance the impact and sustainability of developmental initiatives,” says editor Zyaan Davids Anter.

In addition to detailed analysis on the state of CSI in South Africa, the Handbook provides an overview of global trends and insights on the role of business in society; in-depth profiles of corporate approaches to, and lessons in, development; and a range of thought-provoking articles on developmental topics, including:

How corporates can support fee-free tertiary education: Companies should align their support of tertiary education with their human resourcing needs, government incentives and transformation programmes, and shift expenditure from fees to wraparound support.

Leading through complexity: In a global context fraught with high levels of distrust in institutions, uncertainty and instability, this article explores what businesses can do to build trust and establish a purpose-driven culture.

Should companies support land claims processes? Calvin Chirwa, land reform manager at South African Forestry Company Limited (SAFCOL) shares how this state-owned enterprise is supporting land claims processes to ensure the sustainable development of the communities in which it operates.

Innovative financing: With novel approaches available to create social good, there has never been a better time for corporates to be more innovative in their funding approaches, says Natasha Suchecki, impact investing project manager at the Bertha Centre for Social Innovation & Entrepreneurship.

The Trialogue Business in Society Handbook 2018 can be freely downloaded or purchased in hard copy from: https://trialogue.co.za/publications/ 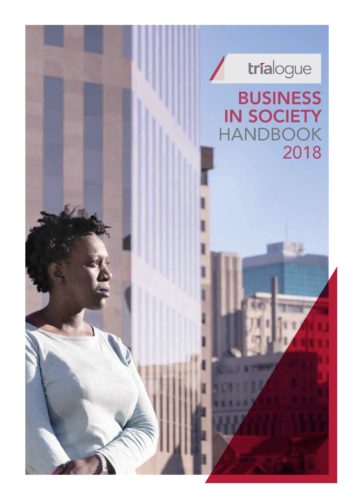