The unequal burden of climate change 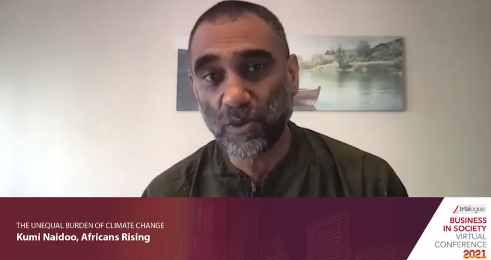 In his talk delivered at the Trialogue Business in Society Virtual Conference 2021, Kumi Naidoo, former executive director of Greenpeace International and founding chair at Africans Rising for Justice, Peace and Dignity, shared his view on why the window of opportunity to reverse climate and ecological damage is closing rapidly. He told delegates that we have little time left in which to solve the climate crisis and our species faces possible extinction unless we can bring global warming under control.

Beginning his speech with a reference to Martin Luther King, who famously said there are certain things that are so unjust and immoral that good, decent people should refuse to become adjusted to them, he advised delegates that they should not accept the status quo.

“Cognitive dissonance – the mass denial of the multiple crises that humanity finds itself facing at this moment – must be dealt with by embracing the idea of creative maladjustment,” he said. “The current systems are broken – they are not serving humanity, they are not serving nature, they not serving anybody – and we need to have the courage to reimagine a different future. Let’s be clear – we are on the brink of a climate, ecological and biodiversity collapse. The decade we find ourselves in is probably the most consequential in the history of humanity.”

Naidoo said we need to have the courage to make fundamental, structural and systemic overhauls of the system, rather than cosmetic, incremental changes that will not fully address the climate catastrophe. He also suggested that progress has been held back by a siloed approach to environmental justice, human rights and social development. “Civil society is to blame because they have not been able to forge intersectionality sufficiently,” he asserted. “The struggle to address poverty, socioeconomic development, human rights and gender equality on the one hand and ensure environmental sustainability and avert climate catastrophe on the other can, must be seen as two sides of the same coin.” He made the crucial point that climate change is a food, water and sanitation crisis that will push our healthcare systems to their limits.

He drew attention to ‘climate apartheid’ – people in poorer countries are disproportionately affected by climate change, even though rich countries shoulder most of the responsibility for environmental damage. He said that in most poor countries higher temperatures are more than 90 percent likely to result in decreased economic output compared to a world without global warming. “A 2015 study in the journal Nature projected that the average income in the poorest countries will decline by 75% by the end of this century,” he warned.

He also indicated that the effects of an increasing number of droughts and water shortages will soon close the gap between who feels the effects of climate change and who does not. He said that South Africa is a water-scarce country and poor residential areas are the first to have water cuts when we have a water shortage – however, wealthier areas can also expect to be affected in years to come.

Naidoo explained that the current economic system does not work for the environment, nor for the overwhelming majority of people on the planet. “We cannot have a conversation about the role of business as actors in climate change without being honest about the fact that what is needed now is not incremental tinkering but system innovation, redesign and transformation to set us on a different trajectory.

What the private sector must do

Naidoo called on businesses to resist ‘greenwashing’ – whereby companies mislead consumers about how much they are doing to protect the environment – and asserted that we need to see a genuine recognition by the private sector of the urgency of the problems we are faced with, not just through rhetoric, but through meaningful and transformative action.

“Companies, if they want to take this issue seriously, must learn to hear the hard truths about how the current economic system is hurting the planet, the climate, and people, and must be willing to make serious changes to the supply chain and operations if they want to be part of the solution,” he said.