Trialogue webinar: How literacy programming can help bridge the widening gap in education 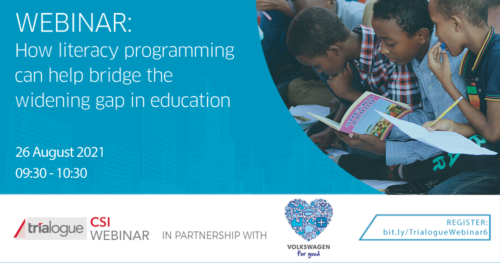 Literacy in South Africa was in a dire state before the Covid-19 pandemic. According to the 2016 PIRLS (Progress in International Reading and Literacy Study) report, almost eight out of ten (78%) learners in grade 4 could not read for meaning, with South Africa ranking last out of 50 countries in the study. In addition, donors do not view literacy as a high priority. Of the companies surveyed by Trialogue in 2020, only 10% of those that invested in education said that they supported language and literacy initiatives. Much needs to be done to promote this foundational skill as a building block that makes other subjects easier to understand, and helps to drive academic success, employment, and civil participation.

On 26 August, Trialogue hosted a CSI webinar sponsored by Volkswagen South Africa (VWSA) to unpack how literacy programming could be bolstered to help bridge the education backlogs that have been further widened by the pandemic. Nonkqubela Maliza, Director of Corporate and Government Affairs at VWSA; Gail Campbell, CEO of the Zenex Foundation; and Nangamso Mtsatse, recently-appointed CEO of Funda Wande served as panellists.

Maliza shared the aims of VWSA’s Legacy Literacy Project, which takes a multidisciplinary, holistic approach and builds on findings that the ability to read for meaning begins during a child’s formative years. Although teachers are the most “pivotal and catalytic instruments for driving literacy”, according to Maliza, parents and caregivers play a critical role and should be encouraged to champion reading as they provide physical and psychological safety and good nutrition to children. “If we could make sure all learners were able to read and write for meaning by the age of ten, it would have a multiplier effect on societal ills,” Maliza pointed out at the outset of the webinar.

VWSA interventions include working with non-profit Nal’ibali “to promote reading in communities by having gogos encouraging storytelling at home”, as well as Shine Literacy, “where at-risk children receive personal guidance from literacy ambassadors”, Maliza said. VWSA has partnered with Rhodes University’s Centre of Social Development, training unemployed graduates to be literacy ambassadors and support teachers in the classroom. “This should be rolled out universally in schools – it should be part of teacher training,” Maliza asserted.

Mtsatse agreed: “We introduced a teacher assistant intervention in Limpopo, and it was critical in supporting learning,” she said. “The question is how to effectively use unemployed youth to support teachers in the classroom.”

The Zenex Foundation has a similarly holistic approach, focusing primarily on helping teachers and heads of department. It is currently researching alternatives to group-guiding reading (which teachers tend to struggle with) in partnership with the University of the Witwatersrand; exploring the role of coaching for foundation phase heads of departments with the Department of Basic Education and UNICEF; and helping to overcome learning backlogs through a foundational phase recovery programme, which is being rolled out in 80 schools.

“Teachers are overwhelmed and doubling up on work due to rotational learning and having to send work home to parents,” Campbell said. “We have not undertaken typical pedagogical and content training workshop sessions, but at communities of practice teachers can share from and support each other. We have also focused on helping them with their immediate classroom needs and have stepped outside the classroom for the first time to draw parents and caregivers into offering children psychosocial support at home.”

Funda Wande’s goal is to train teachers to teach reading for meaning and calculating with confidence. Although the non-profit started out focusing on literacy in the Eastern Cape in 2019, an independent evaluation conducted after a year showed that teachers wanted assistance with other subjects. As a result, Funda Wande has been piloting a project in three provinces, producing an integrated literacy and life skills workbook as well as one devoted to numeracy. “We all know you need to be able to read to study science, maths, robotics – in our view, literacy provides some critical foundational skills, particularly in the early developmental years,” said Mtsatse.

Although the non-profit produced at-home workbooks to mitigate pandemic learning losses, a randomised controlled trial showed that learners continued to struggle, particularly as they had attended only 40% of classes in 2020. An accelerated, targeted month-long programme is being rolled out in schools in the Eastern Cape, Western Cape and Limpopo to support teachers as they help learners to catch up, but Mtsatse said that, realistically, this would not be long enough to achieve significant impact. It will therefore be useful if organisations can build evidence of proof of concept, using best practice and most effective models to provide pathways to scale.

The importance of home language literacy

VWSA focuses on isiXhosa in schools surrounding their plant in Kariega. “For the first two years, we promoted literacy in English because children have to switch to it in grade 4, but we quickly found that the best way for children to become literate is to be functionally literate in their mother tongue, so we changed to isiXhosa,” Maliza revealed.

Funda Wande has developed opensource video and print material in isiXhosa and English First Additional Language (EFAL) with this in mind, particularly as one of its aims is to ensure that all South African learners can read for meaning in their home language by the age of ten. Zenex is focusing on developing resources in all nine official South African languages and is developing lesson plans in partnership with the National Education Collaboration Trust (NECT). Another project looks at developing benchmarks in African language literacy, with Funda Wande as implementing partner. “There are so many benchmarks when it comes to learning in English – like how many words you need to know or how many books you should have read by grade 1 – but we need to develop these for African languages,” said Campbell.

For Campbell, South Africa’s language policy should come under discussion. “Learners have to make a switch in grade 4 to learning in English, across all subject areas – but how do we look at reading across the curriculum?” she enquired.

When schooling resumed after lockdown, the Department of Basic Education prioritised maths over the basics of functional literacy, which has led to a regression among learners, according to Maliza. This approach has also made it difficult for teachers to commit to literacy initiatives.

Mtsatse said trying to push teachers into literacy training is less effective than “walking with them on their journey”, and it is critical to achieve their buy-in because they deliver the curriculum. “We invest a lot of time in relationships – both top-down and bottom-up,” Mtsatse pointed out. “Buy-in takes time and you need to meet the teachers where they are. Also, we can learn a lot from them because they’ve been in the classroom for a long time and have their own agency, views and experience.”

Zenex says literacy monitoring and evaluation (M&E) is not just about tests or assessments. “We look at how a programme has been delivered and how it has been taken up by teachers, as well as what has changed in the classroom,” Campbell said. “You may achieve some gains within a few years, but we have found that it takes much longer than three years to consistently improve on learner performance scores. It is not a quick fix.”

Advice for organisations investing in literacy