TriTalk: The future of work 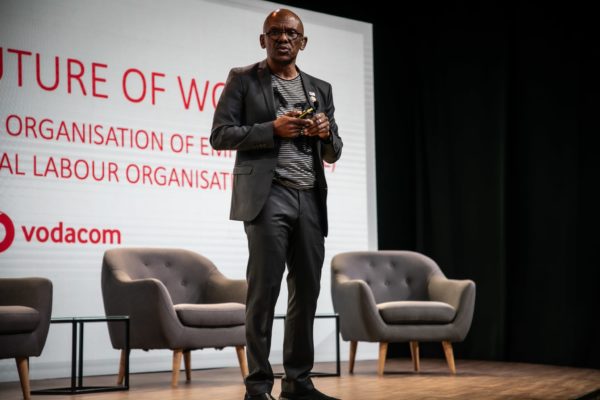 Technology is transforming the world of work. This transformation has accelerated in the aftermath of the Covid-19 pandemic, propelling us into the Fourth Industrial Revolution. It is important for corporates and non-profits alike to think carefully about what the future world of work will look like, and to ensure that no one is left behind.

Professor Mthunzi Mdwaba, vice president of the International Labour Organization (ILO), shared some insights on this topic during the Trialogue Business in Society Virtual Conference 2020.

Prof Mdwaba began by drawing attention to a report published by the ILO in partnership with the International Organisation of Employers (IOE) in 2019. The survey, which involved more than 500 companies, identified five mega-trends affecting the sustainability of economies, namely technological advances, changing demographics, climate change, globalisation, and shortage of skilled labour.

The shortage of skilled labour is a major challenge facing South Africa. It has affected the labour market, making it harder for employers to recruit people with the skills required to grow the economy. This was illustrated in a report published by Deloitte in September 2020. Findings show soft skills will be critical in the future world of work, yet the South African education system does not adequately address these. The report published by Deloitte noted significant gaps in key competencies such as emotional intelligence, having a global mindset, critical thinking and problem-solving. “These are areas that technological advances such as robotics and artificial intelligence will never replace. If one has those skills, they can retain employment and even be able to move between different platforms,” said Mdwaba.

Government has an important role to play in ensuring the education system produces people with the skills required to move the country forward. This will entail embedding human and social skills, strengthening the capacities of career guidance counsellors, supporting tripartite consultations among government, organised labour and employers, creating an enabling environment, and building a culture of lifelong learning from a young age.

“You can’t talk about human capital development and having a human-centred approach without making human and social skills a part of the education curriculum,” said Mdwaba. Linked to this is a need for government to review the Technical Vocational Education and Training (TVET) and apprenticeship system, understand the barriers to establishing a common skills recognition framework, and invest in STEM and digital skills.

Covid-19 has exposed pre-existing structural issues and inadequacies of the South African economy. Low economic growth, unemployment and a growing informal sector are some of the critical issues requiring urgent attention from all role players. The pandemic has also exposed major deficiencies in the social protection framework, not just in South Africa but globally – for example, 15 million Uber drivers across the world were affected by national shutdowns and were not able to access government bailouts because they are not formally recognised as workers. This means people were suddenly left without a livelihood. If multiplied by a modest average of three people per household relying on each of those 15 million drivers, it means more than 45 million people were affected.

Faced with poor economic growth amidst the Covid-19 pandemic, South Africa hit its lowest global competitiveness ranking in 2020. The country is currently ranked 84 out of 190 on the World Bank’s Ease of Doing Business Index, and 59 out of 63 countries on the IMD World Competitiveness Ranking, dropping from number 56 last year. The drop in rankings is a clear indicator the South African economy has become less competitive, having a negative impact on investment opportunities, economic performance, and ultimately job creation. President Cyril Ramaphosa has acknowledged this, and mentioned he would like to see the country improve its rankings. For this to happen, strong leadership that is centred on the wellbeing of all South Africans is important.

A further strategy to enhance the country’s competitiveness and stimulate job creation is to break down silos and focus on productivity. However, productivity issues currently sit in the Department of Employment and Labour. This department cannot do this alone – it has to be a government-wide collaborative process that ensures productivity is embraced by everybody.

Building a competitive economy through productivity

Covid-19 remains a threat to productivity and sustained competitiveness. Initially, South Africa responded well to the crisis, but subsequently went off track, particularly where the economic response was concerned. Productivity SA, which Prof Mdwaba also chairs, is mandated to promote employment growth and productivity in terms of the Employment Services Act. The organisation has come up with a number of strategic interventions that can be implemented as part of efforts to respond to turn the Covid-19 response around and stimulate job creation. Productivity SA believes government needs to support business leaders in the private sector by promoting a structured and concerted effort to place productivity at the heart of all economic growth policies.

“Productivity SA also recommends that the president lead from the front and be a productivity ambassador. That’s critical to teaching everybody to do the right thing,” said Mdwaba.

In his concluding remarks, Mdwaba emphasised the importance of being agile and adaptable. Those who implement a “do-it culture” and adapt technology faster will do well. He also highlighted how South Africa needs to position itself for global competitiveness by focusing on productivity and skills development.