According to the Intergovernmental Panel on Climate Change (or IPCC) report released in August 2021, we will not avoid the most severe negative impacts resulting from increased temperatures until “emissions cease entirely”.

On 26 October, Trialogue, in association with the Sustainability Institute (SI) and the Institute of Directors South Africa (IoDSA), hosted a climate change webinar that explored key topics around the science of climate change, director-level awareness relating to the topic, and business view on the latest developments regarding new codes, standards and frameworks that have emerged in response to climate change.

The webinar was part of a research and webinar series to empower South African directors to make informed decisions about climate-related issues, driven by a context-specific understanding of the relevance of these issues to South African businesses. It comes as important announcements that will affect South African businesses are set to be made during the United Nations Climate Change Conference (COP26), being held from 1-12 November in Glasgow.

The expectation is that new codes, standards and frameworks, such as the Task Force on Climate-Related Financial Disclosures (TCFD), as well as the International Financial Accounting Standards (IFRS) Foundation’s proposed sustainability standards, will fast become important for directors and executives to adopt and integrate into their business model and governance framework. These will be overlayed with international and national green taxonomies and regulations that are either in effect or pending finalisation.

The science behind climate change 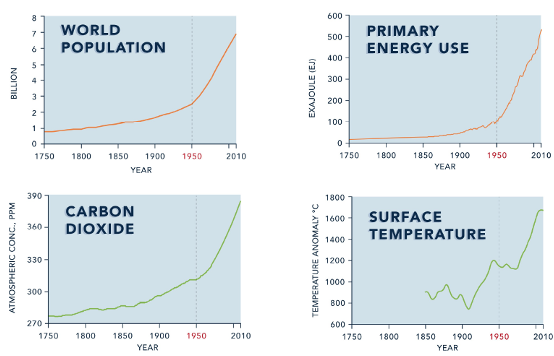 This was the message given to webinar guests by Sustainability Institute director Dr Jess Schulschenk, who explained that in order to stay within a 1.5oC degree warming scenario, global emissions need to be halved by 2030 and reach net-zero by 2050.

Schulschenk pointed to the world’s “great acceleration” in which many more people using a lot more resources have had a detrimental impact on our planet in the last 100 years. The exponential increase in the world population and our thirst for fossil-fuel energy is linked to an increase in greenhouse gases like carbon dioxide, which cases global warming, evidenced by the increase of the earth’s surface temperature (see graphs on the right).

About 20% of the world’s population is responsible for using more than 80% of the world’s resources, which brings up issues of social justice, especially in the South African context, explained Schulschenk. “Those who contributed least to the problem are often those most vulnerable to the impacts of the effects we are starting to see,” she said.

“We can’t separate the social concerns,” warned Schulschenk, pointing to the interconnectedness of climate change to other key risks identified in the World Economic Forum’s 2021 Global Risks Report (see illustration from the report below). “We see that climate action failure is deeply connected and reinforces a number of global risks, many of which we see unfolding in the African context. We find ourselves as part of this intricate web where you tug at one string and it has a ripple through the system. Not only is climate a significant one of those threads, it actually has ripples that are affected and reinforced by many other threads – some social and some financial, but all deeply connected,” Schulschenk said. 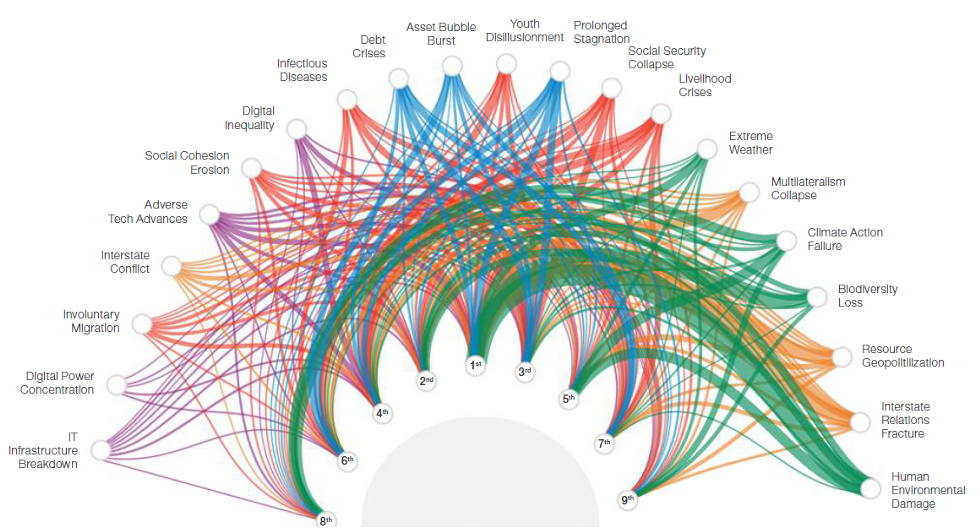 There is a need for capacity development amongst leadership regarding key concepts of climate-related risks, explained Trialogue senior associate consultant Nicole Martens. This emerged from results of a survey taken by directors that are members of the IoDSA. The survey included responses by 177 directors, 73% of whom were in financial services and professional services.

The results showed that 40% of directors could not comfortably explain the causes of global warming. “Understanding the science of climate change is crucial to taking appropriate action as a business,” explained Martens. Almost 80% of directors could not comfortably explain the difference between a 1.5oC, 2oC or 4oC degree scenario. “It is imperative for business to assess the potential impact of these scenarios on operations,” she said.

Less than 8% of directors were aware of South Africa’s Green Finance Taxonomy. “The National Treasury, with support from International Finance Corporation, the National Business Initiative and the Carbon Trust, is working to develop a first national Green Finance Taxonomy for South Africa,” said Martens. “This is one of the key recommendations of the National Treasury draft Technical Paper on Financing a Sustainable Economy (May 2020).”

Read more on the survey results and resources to help you improve your understanding of key issues.

How businesses are responding to climate change

Climate change is a systemic risk for the financial sector, explained Old Mutual Limited ESG and responsible investment analyst Terusha Ramchund. “It’s no longer just the heavy emitters that are responsible, but also the fiduciaries of capital having significant influence over the deployment of funds,” she said. “Looking across from a strategic, financial, as well as operational risk perspective, it is definitely something that needs to be integrated into the way in which we do business.”

Addressing climate change risks is challenging. “The secret to getting ahead is getting started,” said Ramchund. “The TCFD framework has been quite useful in this regard.”

Climate change has had a direct impact on Shoprite’s purpose, explained Shoprite Holdings group sustainability manager Sanjeev Raghubir. Heavy rainfall and droughts have affected the supply and availability of some produce. This included the drought affecting the Eastern Cape and Western Cape, and heavy rainfall in Mpumalanga, which caused low tomato crops and pushed up their price. “From a retailer perspective, climate change has direct and indirect implications in terms of our supply chain, and direct implications in terms of our operations,” he pointed out.

Raghubir explained that low-income communities are set to face the biggest impact of climate change, and many of Shoprite’s customers, suppliers and employees live in these areas. Raghubir indicated that communities are already receiving support through food garden programmes and mobile soup kitchens, which Shoprite deploys in the event of any climate emergency or disaster.

The retailer has committed to a 1.5oC trajectory and net zero carbon emissions by 2050, said Raghubir. This includes a 50% reduction in greenhouse gases by 2030.

He said there are three key drivers and macro trends causing this:

“Climate change risks will materialise in your existing risk categories,” Jorgensen warned, but said the approach to identify and manage these risks does not need to be complex. “That’s where TCFD really provides a helpful process to just begin,” he said, noting that it is an iterative process. “We need to make a start; we need to move to a low carbon economy and we need to understand the risks and opportunities in doing so.”

Following the webinar, Raghubir pointed out that science, debates, predictions and components of climate change are very complex and potentially discouraging for new entrants to engage with. “It may be better to look across the value chain of your business with a climate change lens on to identify business impacts and opportunities, and address these. The layers of governance, strategy and metrics can be added thereafter,” he said. “Take the complexity out and be more action orientated.”

How to keep up to date with COP26:

The following four videos are part of a four-part series on Climate Risk and Climate Oversight for South, produced by the IoDSA in partnership with the Embedding Project.

Tools and frameworks to get your started on your TCFD journey: