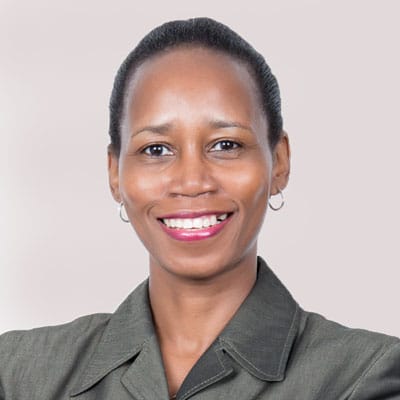 Takalani Netshitenzhe is Chief Officer of Corporate Affairs for Vodacom Group, Executive Director in Vodacom South Africa, and Chairperson of the Vodacom Foundation. She is passionate about corporate social responsibility and has participated as a panellist at several forums, including the United Nations. Netshitenzhe has had a stint as a part-time lecturer in Administrative Law at the University of Venda. She spent 20 years in government, as a lawyer and policy advisor in the security cluster in the Ministry for Intelligence Services; as Ambassador of the Republic of South Africa to Hungary and Croatia; and as CEO of Electronic Communications Security, established under the then National Intelligence Agency. She was admitted as an Advocate of the High Court of South Africa in 1996 and is the Read to Lead Ambassador for the Department of Basic Education. She holds an executive certificate on cybersecurity from Harvard School of Governance; a cyber-security postgraduate certificate (cum laude); a BJuris degree; LLB, higher diploma in company law, and Master’s degree in security studies.